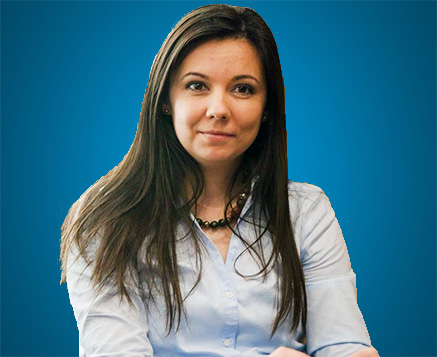 Ms ÁJGEL has worked for 3 years in the Senate of Romania as a consultant and chief of cabinet in one of the Harghita county district offices and is a member of the Bixad Local Council (Covasna County) since 2012. She started her career in 2007 at a privately owned undertaking, that is professionalised in conceptualising, planning and organising events and programmes, working with a range of clients across the public, private and third sector.

She is a communication and public relations specialist with 10 years of experience in the field, having graduated from Sapientia Hungarian University of Transylvania in 2007. She has received a Master’s Degree in social communication and public relations in business from the Bucharest Academy of Economic Studies in 2009. Committed to further developing her skill set and knowledge, Ágnes is momentarily studying public administration at Babeș-Bolyai University’s College of Political, Administrative and Communication Sciences.

Ágnes studied Esperanto language for 5 years and having represented Romania at the World Esperanto Congress for three years.

During her studies, she took an active role in volunteering and in the organising of numerous events. Ágnes was responsible for communications and public relations at the Transylvanian Music Awards for two years, for many youth festivals and editor of Satelit, the newspaper of Sapientia, during her years at the university.

With a superb community service record and a commitment to helping young people, Ágnes is active in numerous NGOs, political and youth organisations: she is the founder of the local youth organisation from Bixad and was the vice-president of the Covasna County Youth Association – HÁRIT for 5 years. In 2013 she became the president of the Covasna County RMDSZ (Democratic Alliance of Hungarians in Romania) Women Organisation, where she is helping in the implementation of central programmes and advocating for women’s specific issues.

Ágnes finds joy in organising events and travelling. One of her biggest dreams is to found a village museum and to promote the touristic value of her home region.